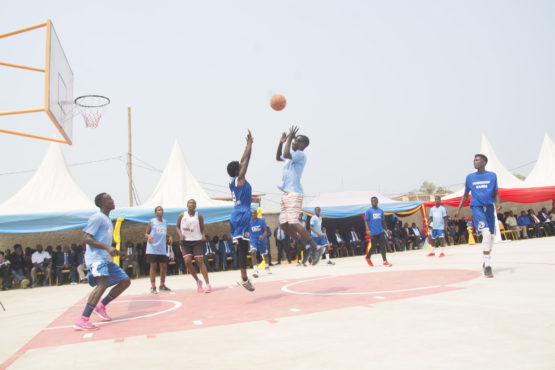 Pictures of the Friendship Games : https://flic.kr/s/aHsmqivjCy

Burundi and Democratic Republic of Congo (DRC) basketball athletes played in the same team this weekend for the first time at the Friendship Games, a three-day event organized by Peace and Sport and aimed at promoting dialogue and multicultural exchange in the Great Lakes region.

During the Opening Ceremony of the Friendship Games, mixed Burundi and RDC basketball teams, including players from organization Promo Jeune Basket, played friendly (or played a friendly match) in an extraordinary demonstration of trans-border cooperation and sport diplomacy. Boys and girls between the ages of 16 and 17 competed in mixed teams in Uvira, South Kivu, one of the most-affected provinces by population movement in DRC.

“It is a gesture for peace and dialogue in the region,” Peace and Sport President and Founder Joel Bouzou tells following the conclusion of the Games. “The Friendship Games are a good step to promote multicultural exchange between youngsters and a great opportunity to international sport federations and high-level athletes to endorse the power of sport for positive change”.

Champions for Peace and International Federations engage for peace

This year 150 youngsters and 50 animators from five community centers located in Burundi, Rwanda and the DRC participated in the Friendship Games. Burundi National Olympic Committee, Peace and Sport Champions for Peace and eight international federations supported the Games during a three-day event, which was marked by sport seminars, capacity building and peace-building workshops. Youngsters played in 12 disciplines, which were designed to promote positive values and Peace and Sport “Sport Simple” methodology.

The International Teqball Federation (Fiteq) led teqball demonstration using Sport Simple handmade teqball tables, which were made of old tables and fishing nets. An exclusive demonstration of Baseball5 was proposed everywhere by the World Baseball and Softball Confederation (WBSC). This street version of baseball can be played on any surface and it promotes social inclusion and gender equity. Alongside, the World Karate Federation (WKF), represented by the champion Fodé Ndao and the World Rugby, trained 50 animators on sporting values, technics and pedagogy. The head of the Education Commission Mr. Mohamed Meridja represented the International Judo Federation at the Games.

Farid Lounas, International Table Soccer Federation (ITSF) President, declared: “We are very pleased to take part in such a great project. Table Soccer is a sport accessible for everyone and is conveying values such as respect and tolerance that bring humans together. Positive feelings brought by fun and team spirit are fantastic ways to connect people and build peace.”

International Basketball Foundation (IBF) President Sheikh Saud Ali Al-Thani said: “We are very proud to be involved in the Friendship Games again this year. This event shows the positive impact that sport can have, bringing people together with a common interest. It is completely part of our strategy of using sports, particularly basketball for good”.

The full list of involved International Federations is as follows:

About the Friendship Games

The Friendship Games are organized annually by Peace and Sport and the respective host countries’ National Olympic Committees. Peace and Sport currently helps to support six youth centers within the African Great Lakes region, which gather during the Friendship Games, and use sport to promote social inclusion, education, and intercultural dialogue.