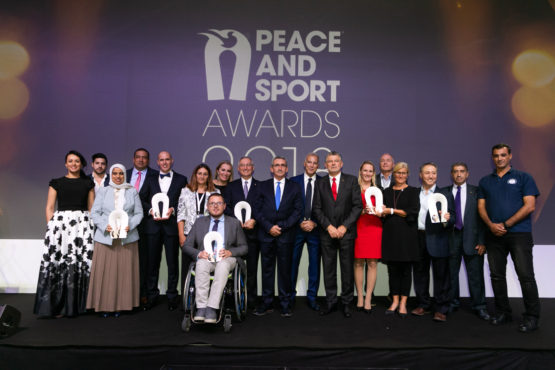 Last night the annual Peace and Sport Awards ceremony took place at the Rodos Palace Hotel in the Island of Rhodes. 350 major decision-makers from across the Mediterranean region joined the ceremony to discover the 8 winners. Indeed, as part of the Peace and Sport Regional Forum, awards were given to international and regional organizations, for their contribution to positive social change through sport. Among the winners, French World Cup Champion and newly Champion for Peace Blaise Matuidi, for his work with his association “Les Tremplins Blaise Matuidi” which helps the reinsertion of kids from the suburbs.

After becoming football World Champion in Russia last summer, football player Blaise Matuidi won another trophy: he received the Champion of the Year Award of Peace and Sport in Rhodes. This title is the recognition of his commitment to children and the most disadvantaged, through his association “Les Tremplins Blaise Matuidi” which he created in 2016. Blaise had also participated in an opinion calling footballers to commit themselves to social causes.

During the Awards, Matuidi also announced throughout a video that he has joined the elite club of the Champion for Peace. With Matuidi there are now 116 Champions for Peace, high level sportsmen personally committed to the peace through sport movement. They dedicate their time, their fame and their athletic experience to serve projects which use sport to tackle social issues. Among the Champions for Peace, famous football players like Didier Drogba and Christian Karembeu.

Blaise Matuidi said: « This trophy is a reward for my association’s work with children. There is so much to do to transmit respect, tolerance and fair play in order to make children smile again. I am very happy to join the Champions for Peace Club with other athletes before me. I hope that together we can inspire other generations. »

During the Awards ceremony, Joël Bouzou, President and Founder of Peace and Sport expressed : « This evening celebrates all those who have contributed to the peace movement through sport. We have rewarded several outstanding winners here tonight, but we are also grateful to all those who have made a commitment. It is a collective effort, and together we must move forward and achieve our goals. I would also like to congratulate Blaise Matuidi for his commitment to young people and welcome him to the Peace and Sport family. »

The winners, in the different categories, are :

Champion of the Year: Blaise Matuidi for his association “Les Tremplins Blaise Matuidi” in order to help the reinsertion of kids in the suburbs.

April6 Initiative of the Year: Ministry of Youth and Sports of Bahrain which organized the “1,000 Steps for Peace” event and the “Color Run” event which gathered more than 5,000 people to celebrate April6 and to raise funds to build a football field in the Za’atari refugee camp in Jordan.

Diplomatic Action of the Year: U.S. Department of State’s Sports Diplomacy Division with the University of Tennessee’s Center for Sport, Peace, & Society. Its goal is to protect disability rights and foster women’s empowerment by airing dynamic emerging female leaders from 65 countries with America’s top female executives through sports.

Regional Peace-Through-Sport initiative of the year: American Community Schools of Athens who led educational activities on the promotion of peace through sport and organized “The color of peace” event to promote social inclusion and dialogue between different cultures.

Regional Sport Organization of the year: Hope Refugee F.C. who is a club managing a football team comprised of refugees and asylum seekers living in Athens, Greece with an aim to foster their integration within society.

Earlier in the afternoon, a diplomatic event took place at the Ancient Stadium of Rhodes, a mythical sports venue. Among the many highlights, a moment of diplomatic unity around a Teqball match featuring four international football players: French football star and Champion for Peace Christian Karembeu, Greek footballer Giorgos Karagounis, 2004 UEFA European Champion, Turkish Hamza Hamza Hamzaoglou and Cyprus Charalambos Andreou. This match was a perfect example of the power of cooperation and peace between countries through sport.