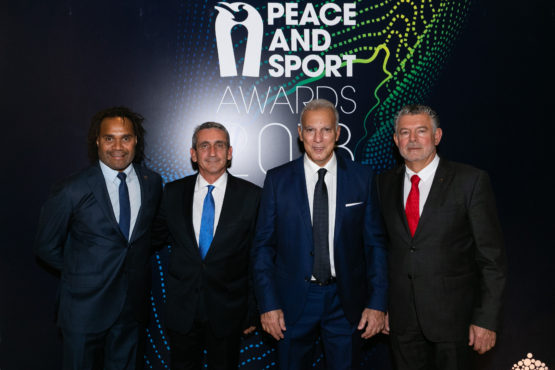 Peace and Sport Regional Forum was successfully held this October 18th, in the iconic island of Rhodes by the international organization Peace and Sport and the Region of South Aegean. Entitled “Societies in Motion: Rising up through Sport”, the Regional Forum gathered 350 decision-makers from 50 countries, 50 high-level speakers, 22 award nominees and 10 Champions for Peace, to demonstrate the positive impact of sport in societies.

Along the day, high-profile participants from across the Mediterranean region, including regional actors, Nobel Peace Prize Laureates, sports governing bodies, high-level athletes, international organizations, NGOs, academia and Champions for Peace identified regional challenges and built synergies to maximize the use of sport for positive change.

The event began with three plenary sessions that saw prestigious advocates from the peace-through-sport movement coming to discuss about domestic and international initiatives taking place in the Mediterranean.

On the second session, the subject of cities as a hub of innovation and social inclusion was highlighted by great speakers. Among them, Petros Kokkalis, President of Hope Refugee FC, Athena Zerva, Head coach Greek National Deaf Women’s basketball team, Rimla Akhtar, Chair of the Muslim Women’s Sport Foundation, and Kashif Siddiqi Founder of Football for Peace and Champion for Peace.

The last morning session featured three great champions: Mike Seitis, paralympic and World Record holder 400m, Mihalis Kakiouzis, Ex-Captain of Greece National Basketball team and Eleven Campaign Ambassador and Christian Karembeu, FIFA World Champion and Champion for Peace. Based on their personal stories, they presented tangible examples on how we can invest in human capital for social and economic development.

A Decision Making Rountable gathered nine sport ministries from the regional and four high authorities from the sporting world including Hellenic Olympic Committee, the Jordan Basketball Federation and FITEQ.

Earlier in the afternoon, a diplomatic event took place at the Ancient Stadium of Rhodes, a mythical sports venue. Among the numerous highlights, a moment of diplomatic unity around a Teqball match featured four international football players: French football star and Champion for Peace Christian Karembeu, Greek footballer Giorgos Karagounis, 2004 UEFA European Champion, Turkish Hamza Hamzaoglou and Cypriot Charalambos Andreou. This match was a perfect example of the power of cooperation and peace between countries through sport.

Late in the evening, the basketball legend Nikos Galis elaborated on the role of sport inspiring new generations, explained the ways sport can be used for social change and shared his personal story, leading by his example.

Commenting on the selection of Rhodes as the location of this year’s Peace and Sport Regional Forum, George Hatzimarkos, Governor of the region of South Aegean, highlighted: “The trust and confidence that the international community has shown in the organization of this Forum, does not reflect only upon us but on our country as well. The high-profile representatives that came together at the island of Rhodes demonstrated that nothing great can ever occur by standing still. Great victories come by taking action and by moving forward – only the greatest of people have the ability to establish great societies”.

Respectively, Joël Bouzou, Peace and Sport’s President and Founder, pointed up “This Forum set off a new way of thinking and acting. I do hope that it will have helped to specify adapted initiatives that will, in return, transform societies and leave a sustainable legacy for generations to come. I believe that debates and discussions held today will offer a unique opportunity for delegates to build strong relationships and partnerships, and that it will promote cooperation and dialogue between countries from the Mediterranean region. We have paved the way for the future…”

In the framework of the Forum, the Peace and Sport Awards rewarded 8 international and regional organizations and individuals who have made outstanding contribution to peace, dialogue and social change in the world through sport. From specific field programs to global initiatives, the winners have led projects that symbolize sports’ capacity to reconcile divided or opposed communities.

The Awards winners are:

Champion of the Year: Blaise Matuidi

April6 Initiative of the Year: Ministry of Youth and Sports of Bahrain

Diplomatic Action of the Year: U.S. Department of State’s Sports Diplomacy Division with the University of Tennessee’s Center for Sport

Regional NGO of the year: Budo for Peace