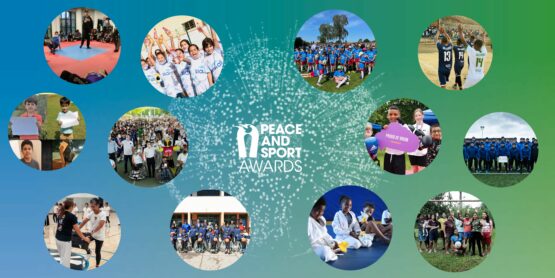 The nominees of the Peace and Sport Awards 2022 have been revealed!

This year, the winners will be awarded during the Peace and Sport Awards ceremony that will be held in the Principality of Monaco on November 30th. The Jury, presided by 1994 FIFA World Cup winner, Legend of PSG Football Club, and Founder of the Gol de Letra Foundation Raí Oliveira, will be in charge of selecting the winners.

The nominees for the 2022 Peace and Sport Awards are:

April6 Initiative of the Year

The Fundación Alfredo Harp Helú led an outstanding mobilization for the International Day of Sport for Development and Peace carrying out more than 60 sporting activities with thousands of beneficiaries. The initiative raised remarkable awareness about April6 and the #WhiteCard symbol.

When two boys raised the #WhiteCard on the occasion of the International Day of Sport for Development and Peace it meant more than the friendship between a boy from India and a Pakistani. Their action sent a message of hope, dialogue and peace, for their countries and the whole world.

Every year, the Estonian Olympic Committee carries a strong mobilization to celebrate the International Day of Sport for Development and Peace. In 2022, efforts were focused on supporting Ukrainian refugees with the message #üheskoos (#together) showing unity against violence and war.

CSR Initiative of the Year

The program has put young girls’ education at the forefront of its corporate social responsibility. By encouraging access to sport, over 1250 young girls developed technical and soft skills, including confidence, sociability, productivity, and leadership.

Through football, the women-led club has established the project to give the youth tools to express themselves and channel violence into creation, using sports and art. Results include reduced youth’s approval of violence and more peaceful relations with peers and parents.

As the automaker’s philanthropic arm, Ford Fund has been supporting local communities for more than 70 years. The “YD-Maj For Equal Play” project, conducted in with Tibu Africa, targets the social inclusion of young people with disabilities aged between 10 and 16 years old through sport.

NGO of the Year

4-H Zimbabwe Foundation’s mission is to empower youth to be responsible, caring and contributing leaders that contribute to positive change in the world around them. The project aims to foster engagement and unite traditionally divergent community groups by organizing sport tournaments. It raises awareness on the role of sport for tolerance, social cohesion and peace building.

Through football, the Alakäläwa GOLEES has created spaces for social transformation where girls and women in vulnerable situations can develop holistically. The project aims to create a structure of female teams from different indigenous communities in Costa Rica, supports their gradual self-management, and makes female players aware of their human rights to reduce teen-pregnancies rates.

Luta pela Paz uses boxing and martial arts to help realise the potential of young people living in communities affected by inequality and violence, like the Maré Favela in Rio de Janeiro. The project aims to build young people’s resilience to the context they live in, and support them to build the foundations to lead peaceful, positive and productive lives.

Institution of the Year

The Birmingham 2022 Commonwealth Games were used as a catalyst to accelerate the city’s response to the challenges and the aspirations of its ethnically diverse population. The “Be Bold Be Birmingham” community engagement and legacy program contributed to strengthening connections between different communities and sustaining their involvement in the Games and beyond.

The National Olympic Committee of Denmark is contributing to the inclusion of vulnerable groups into local sport clubs using sport as a lever for social cohesion and integration into society, with special focus on children and veterans. Veterans were able to participate in matches organized by the National Federation while over 2050 refugee children were benefitted from local sport clubs.

The project aims to empower girls and young women to use karate to defend themselves from all forms of gender-based violence. Several activities are put in place, including Karate and self-defence workshops implemented for girls and women from local vulnerable communities and demonstrations involving renowned and committed athletes to raise awareness on gender-based violence.

About the Peace and Sport Awards

Since 2008, the Peace and Sport Awards have rewarded organizations and individuals who have made an outstanding contribution to peace, dialogue, and social stability in the world through sport. From specific field programs to global initiatives, the winners have led projects that are symbolic of sport’s capacity to reconcile divided or opposed communities.