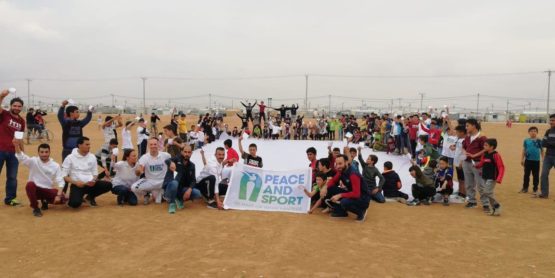 Peace and Sport is celebrating the 6th edition of April6, the International Day of Sport for Development and Peace (IDSDP), with inspiring projects all around the world and the #WhiteCard digital campaign that will end during the FISE Hiroshima on the April 19. Celebrations were organized in 109 countries, involving a rich diversity of actors such as governments, international federations, National Olympic Committees, NGOs, Champions for Peace, athletes, schools… So far, the Monaco-based organization generated a worldwide mobilization with more 800 projects registered on www.april6.org platform.

This year, the mobilisation started with Peace and Sport official launching of the 2019 #WhiteCard campaign from the island of Cyprus, during the Friendly Football Day that gathered Turkish Cypriot and Greek Cypriot communities, on the 19th of March. Didier Drogba, Peace and Sport Vice-President, send a message to the international community calling for a global and massive mobilization around the symbol of the #WhiteCard in the framework of the International Day of Sport for Development on April6.

Didier Drogba, Peace and Sport Vice-President, said:
“Because sport is affecting our society or because our society affects sport, let me kindly remind you to raise your #WhiteCard. Because as athletes,we are role models and we have the responsibility to show the example, I personally invite sportspersons to join the #WhiteCard movement to promote peace-through-sport.”

This year, Peace and Sport spured an outstanding mobilization in 109 countries, especially in Pakistan, Estonia, Georgia or Mexico, where a wide range of actors like TV channels, schools, associations, athletes, national leagues, official representatives, National Olympic Committees took part to the campaign in very creative ways. In Vatican, for instance, the “Marathon Mass” joined the movement with #WhiteCard pictures taken inside the Basilica and in the iconic Piazza del Popolo, one of the most beautiful places in Rome.

For the third consecutive year, the Guatemalan Olympic Committee, FUNOG and Peace and Sport were partners of the Peace and Sport Forum for the Americas aiming at promoting the positive values of sport in Latin America. This year, Peace and Sport’s President and Founder Mr. Joël Bouzou led the Panel Session “Sport as a catalyst for peace”. Additionally, 120 youngsters took part in a Sport Simple workshop.

Joël Bouzou, President and Founder of Peace and Sport declared:
“This year, once again, so many countries came together to promote peace through sport and celebrate the International Day of Sport for Development and Peace. It is more than ever important to develop initiatives that foster the values of fair play, mutual respect, civic engagement and team spirit.”

Champions for Peace celebrated April6, generating a huge mobilization amongst children and youngsters. Marc Raquil, Champion for Peace and World Champion in the men’s 4 x 400m relay, animated a conference in front of 400 students during the “Rally Princess Charlene” organized by the Department of Education, Youth and Sport (DENJS) in collaboration with Peace and Sport, the Princess Charlene of Monaco Foundation, the APEM (Parent-Teacher Association of Monaco) and the Monegasque Anti-doping Committee, on April 5.

Champions for Peace Tegla Loroupe and Honey Thaljieh participated to an event organized by Save the Dream and the International Olympic Truce Center (IOTC) in Berlin, on April 6-7. This event aims to share and develop ideas on the use of sport to promote inter-cultural dialogue, peace and reconciliation.

Honey Thaljieh, Former Captain of the Palestinian National Women’s Football Team and Champion for Peace said:
“I grew up in a war zone and I experienced living in a country divided by a wall. But I also experienced the power of sport to break walls down and to bring people together. I am glad to share this message with youngsters here in Berlin.”

About the International Day of Sport for Development and Peace

On 23 August 2013, with the support of the International Olympic Committee, the UN General Assembly declared April 6th as the International Day of Sport for Development and Peace (IDSDP) at the United Nations Headquarters in New York. This decision represented a historic step in recognizing the transformative power of sport and its boundless potential to advance positive social change. The following year, Peace and Sport launched the #WhiteCard digital campaign and the www.april6.org platform in order to create a global movement for the International Day of Sport for Development and Peace and highlight the positive power of sport. Since then, both initiatives have met great success. Over the last five years, the platform has registered 3010 projects from 182 different countries.