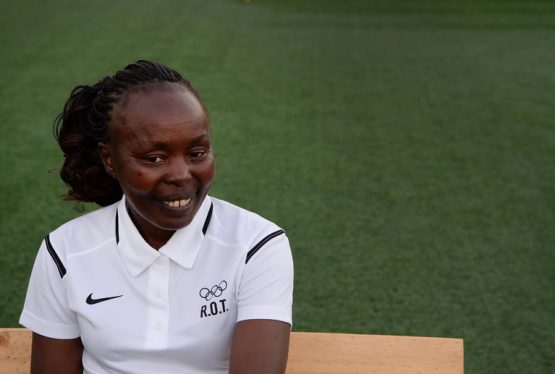 Champion for Peace Tegla Loroupe participated in her fourth Olympics, this time not as a marathoner but as a peace ambassador bringing attention to the global refugee crisis. As “Chef de Mission” of the Refugee Olympic Team, Tegla Loroupe was in charge of a group of 10 displaced athletes.
“This Refugee Olympic Team will give hope to hope-less people. These athletes unite us all together – they are a symbol not just for sport but for the whole world. The refugee issue is not a new one, it has happened before but this team gives us all an idea of our shared humanity.”The Tegla Loroupe Peace Foundation in Kenya prepared five of those athletes from South Sudan for the Olympics after they were identified during trials held to find runners in 2015 at two refugee camps.

Thomas Bach – IOC President: “This will be a symbol of hope for all the refugees in our world, and will make the world better aware of the magnitude of this crisis. It is also a signal to the international community that refugees are our fellow human beings and are an enrichment to society.”

Joël Bouzou, President and Founder, Peace and Sport: “If the Olympic Games are about fair play, solidarity and friendship, then nothing exemplifies it more in my mind than the Refugee Olympic Team, which marched under the Olympic flag in the Opening Ceremony representing more than 65 million displaced people worldwide.”