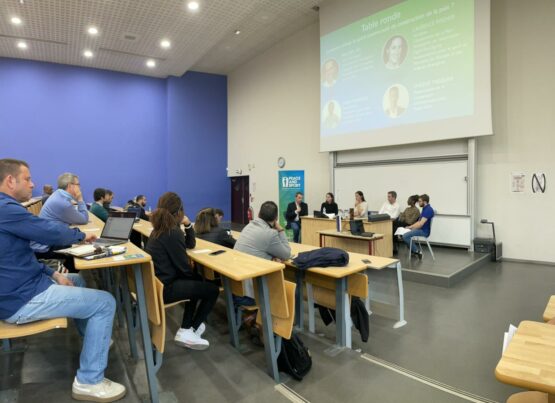 “Sport, an answer for peace”: A conference organized by Peace and Sport and the University of Paris Nanterre

On the occasion of the International Day of Sport in the Service of Development and Peace and in a tense geopolitical context, the conference “Sport, an answer for peace” allowed students from M1 STAPS Sport and Social Sciences to learn more about the role of sport in conflict prevention, reconciliation, coexistence and crisis management by discussing with experts.

Teacher-researcher at the University of Paris Nanterre Julien Sorez introduced the theme by recalling the historical link between sport and peace, with the establishment of the Olympic truce in ancient Greece. A concept that has since disappeared, before being reused in the 90s.

Philippe Rio, Mayor of Grigny and President of the French Association of Municipalities, Departments and Regions for Peace, shared his experience as mayor of a city facing violence and reaffirmed the potential of sport to regulate these tensions.

“Wearing the same jersey is already an important act of conflict resolution. […] Sport is much more than sport.” he declared.

Laurence Fischer, Ambassador for Sport at the Ministry for Europe and Foreign Affairs, three times World Karate Champion, Founder of the association Fight for Dignity and Champion for Peace, then explained how to foster the development of sport for development and peace actions on the international scene, through a network of embassies and the linking of actors from the sports and political world.

As Head of International Cooperation at Paris 2024, Vincent Pasquini spoke about the actions of the Organizing Committee of the Olympic and Paralympic Games in favor of development and peace. He also discussed about its support to projects using sport as a vector of social inclusion, in particular through the Terres de Jeux label or the Generation 2024 programme. Through its Heritage programme, Paris 2024 seeks to raise awareness about environmental issues during and after the Games, using the Games’ exceptional power of influence.

Diana Gandega, professional Basketball player, Gold medalist at the 2015 African Games and Champion for Peace, spoke about her influence as a high-level sportswoman and underlined the tangible effects of sport on the promotion of values ​​and its impact regarding the empowerment and employability of individuals.

Benjamin Boukpeti, only Togolese Olympic medalist and Champion for Peace, presented his involvement in SDP programs, in particular alongside Peace and Sport. The public learned more about the “Peacemakers” program set up in Lomé, Togo, intended to train peace educators in the field.

Mahawiya Ouro-Koumoni, Coordinator of the Peacemakers Project in Togo and President of Terres en Mêlées Togo, explained the objectives of the program and described the content of the practical peace-through-sport sessions.

The presentations were followed by an exchange with the students, who asked about the difficulties encountered in implementing SDP activities. The lack of human and material resources and the lack of financial investment, the lack of visibility and representativeness as well as little or no organized global governance are among the elements mentioned.

The conference ended with the screening of the film “Captain Ali“, which evokes the life of a Syrian refugee who became a kickboxing coach in the Zaatari refugee camp, as well as a call for peace through the #WhiteCard, the symbol of peace through sport.