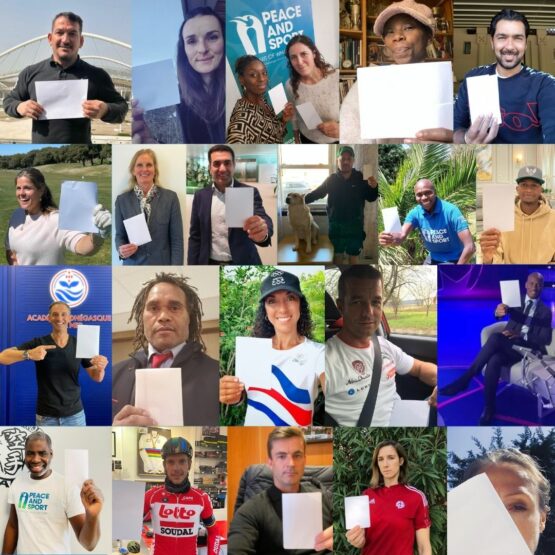 Peace and Sport spurred an outstanding international April6 mobilization around the symbol of the #WhiteCard.

In a geopolitical context of massive tension, under the motto “Sport is an answer. Raise your #WhiteCard”, the 2022 WhiteCard campaign initiated by Peace and Sport invited the entire world to demonstrate their commitment to dialogue and peace through sport.

About the global celebrations, Joël Bouzou, Peace and Sport’s President and Founder, declared:

“It is fantastic to see such a massive and diverse expression of support to the peace-through-sport movement. This 9th edition of the WhiteCard campaign has successfully highlighted that sport can contribute to constructing a culture of peace. These results are a source of pride for our organization and, more generally, for Monaco’s Principality. It is another step towards convincing decision-makers to include sport in programs and initiatives to build peace.”

45 Champions for Peace got mobilized to promote sport as a tool for development and peace.

During the World Olympians Association General Assembly in Cairo,Champion for Peace and Unique Gold Medalist of Burundi Venuste Niyongabo and Peace and Sport’s CEO Jean-Jérôme Perrin Mortier,presented the outputs of the Peacemakers Project in Burundi, highlighting the concrete answers that sport can bring to the construction of peace. After the event, African Olympians and NOA representatives raised their WhiteCard as a sign of support to peace.

In Expo Dubai 2020,Champions for Peace Pierre Frolla – World Champion Freediver, and Marlene Harnois – Taekwondo Olympic Medalist, participated in a demonstration of the Peace and Sport Methodology, focused on the transmission of values. This demonstration was followed by a conference aimed to raise awareness of the celebration of the International Day of Sport for Development and Peace at the Monaco Pavilion.

During a conference organized in partnership with the University of Paris-Nanterre,Champions for Peace Benjamin Boukpeti – Unique Togolese Olympic Medalist, Diana Gandega – African Champion, and Laurence Fischer – Ambassador for Sport at the Ministry of Europe and Foreign Affairs, shared their expertise in peace-through-sport with students of the “Sport and Social Sciences” Master’s degree. Mahawiya Ouro-Koumoni – President of the NGO Terres-en-Mêlées Togo, Philippe Rio – Mayor of Grigny, and Vincent Pasquini – Head of International Cooperation at Paris 2024, also participated in the conference.

On April 9, before the match, players from the Greek football club Olympiakos and the Ukrainian football club Shakhtar Donetsk demonstrated that football can be used as a tool for peace by raising their WhiteCard. Champion for Peace and current Sporting Director of Olympiakos Christian Karembeu also joined the global mobilization.

Peace and Sport wants to thank H.S.H. Prince Albert II for His great support, the Champions for Peace, and all the stakeholders in sport for peace who supported the campaign and led concrete peace-through-sport initiatives in the field.

In the coming months, Peace and Sport will continue undertaking an ambitious monitoring and evaluation strategy within the framework of the Peacemakers Project, an international program led in partnership with 10 field organizations over 3 continents.

Together, we can amplify the impact of sport-based initiatives to build a culture of peace. Let’s promote the values of April6 all year long!

Peace and Sport, the peace-through-sport leader international organization, created the www.april6.org platform and the #WhiteCard campaign in 2014. Since then, the Organization is leading the digital and international #WhiteCard mobilization.

In 2022, the mobilization was launched with a statement for peace following the invasion of Ukraine by Russia. More than 700 people, including 49 Champions for Peace and 18 Olympic Champions signed the statement (Read more).

Placed under the High Patronage of H.S.H. Prince Albert II of Monaco and based in the Principality, Peace and Sport is an international, neutral and independent organization that promotes the consolidation of peace through the power of sport. It was created in 2007 by Joël Bouzou, Olympic medalist, Modern Pentathlon World Champion, and President of the World Olympians Association.