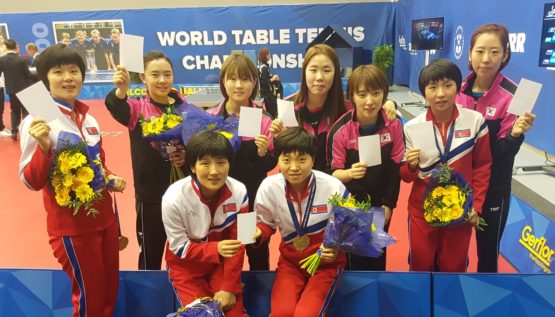 In the past, Peace and Sport have seen the willingness from North and South Korea to use table tennis to build bridges. In 2011, Peace and Sport in cooperation with the ITTF held a Table Tennis Cup in Doha, Qatar in which South Koreans played alongside North Koreans, on the same side of the table.

Peace and Sport President and Founder, Joël Bouzou, said: “Sport Diplomacy can help strengthening relations between countries and creating the conditions for sustainable peace. Thanks to committed international sport federations presidents such as ITTF President Thomas Weikert, sport has been used as a medium to build bridges and dialogue”.

It is not the first time this year that athletes from long-time opponent countries have posed for a symbolic #WhiteCard. During the PyeongChang 2018 Olympic Winter Games, the International Ice Hockey Federation (IIHF) presided by René Fassel and Peace and Sport brought together the unified Korea women’s ice hockey team for a #WhiteCard photo.

Peace and Sport’s long-term goal of leveraging sport’s influence for development and peace has gathered increased momentum year after year, with strong support from athletes, governments, civil society and sport organizations. In 2018 the #WhiteCard has reached over 90 million people worldwide on social media including high-level athletes and national and international sport federations.

“The #WhiteCard is the symbol of the peace through sport movement. It portrays the positive values of sport. The ITTF and IIHF are great examples that sport federations can contribute to building a peaceful world by educating youth through sports, promoting sports diplomacy and spreading the values of sport through the #WhiteCard”, stated Mr. Joël Bouzou.

Peace and Sport and ITTF have teamed up together to foster social inclusion in vulnerable communities over the last 10 years. In 2009 both entities with the involvement of Swedish table tennis legend and Champion for Peace Peter Karlsson launched the “Ping Pong Ba Dame” (Ping Pong for Peace) program in East Timor. More recently, collaboration between Peace and Sport, ITTF and UNHCR has provided sporting opportunities and educate values through table tennis to Syrian refugees living in the Za’atari Camp in Jordan.