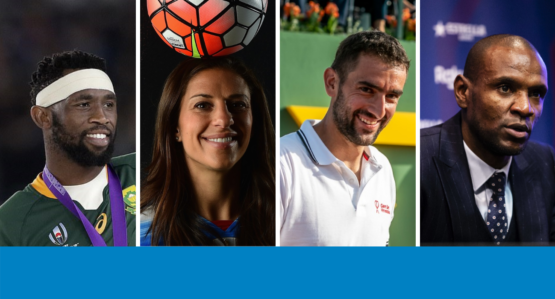 This year, Siya Kolisi, Carli Lloyd, Marin Čilić and Eric Abidal rank among high-profile nominees for the 2019 Peace and Sport Awards. They have been nominated for the “Champion of the Year” category which honours a sportsperson who has headed a significant and sustainable sports initiative for peaceful change. Joël Bouzou, President and Founder of Peace and Sport started the Peace and Sport Awards to showcase projects which are representative of sport’s ability to reconcile divided or opposed communities.

South Africa’s World Cup-winning captain Siya Kolisi is the first black captain in the Springboks’ 126-year history. From hunger and deprivation in an Eastern Cape township to hero-worshipped captain of South Africa’s rugby team, Kolisi has become a true inspiration for his country, especially among youth. Since the world title, he encourages companies and individuals to join him in giving to the South Africans youth access to the skills they need for a successful future. Hundreds of under-resourced schools will be modernised with digital tabs thanks to this national program.

Carli Lloyd is two-time FIFA Women’s World Cup champion (2015 and 2019), two-time Olympic gold medallist (2008, 2012), co-Captain of the U.S. Women’s National Team. She advocates for gender equality and has been a key player in the battle for pay parity. She uses her celebrity to draw attention to discrimination.

Apart from these two 2019 World Champions, two other sporting legends join Peace and Sport’s Award nominees for the “Champion of the Year” category.

2014 US Open Winner and ATP player Marin Čilić is one of the best Croatian tennis players in history. Through his foundation, Čilić set up “Game Set Croatia”, bringing together Croatia’s greatest athletes to emphasize the notion that all children deserve equal opportunities to develop and reach their full potential. This unique event showcased tennis whilst raising funds to bring adequate sports facilities to Croatia’s most under-served communities.

Eric Abidal is one of FC Barcelona Legends and 2006 FIFA World Cup Vice-Champion. After winning 18 titles during his career, Abidal decided to step back from the pitch to dedicate his work to his charitable initiatives. Through the Eric Abidal Foundation, he has led projects such as “Robot Pol” and “Here to Change” improving the lives of other people and conveying values such as self-improvement, willpower, effort, generosity and teamwork.

“It is very exciting to have such high-profile nominations in the “Champion of the Year” category. With Joël Bouzou, we are convinced that athletes are role models and a source of inspiration for young people around the world. It is important to reward them for their social commitment in order to show that sport goes beyond sporting performances and plays a genuine role in serving society.”

The winner will be selected by Peace and Sport’s Champions for Peace, and the prize will be presented by the 2018 Award winner: Champion for Peace and football World Champion, Blaise Matuidi. The Peace and Sport Awards ceremony will be held on December 12th in the famous Opéra Garnier in the Principality of Monaco, hosted by famous French sports journalist Anne-Laure Bonnet.  It is a key event in the 2019 Peace and Sport International Forum.

About Peace and Sport International Forum

This year’s Forum will be a hub for over 600 key decision-makers including Heads of State, strategical leaders from business and the sports world, Nobel Peace Prize Laureates, representatives from civil society and international organizations, and bright young talents, who will all embark on a journey to explore the theme “Investing in Peace, Acting through Sport”.

This 12th Peace and Sport International Forum will be held into the very latest conference centre in Monaco – the One Monte-Carlo – located in the heart of the Principality, on December 11-13. This edition will mark the 10th anniversary of the Champions for Peace club, paying tribute to 10 years of commitment of more than 100 high-level athletes.