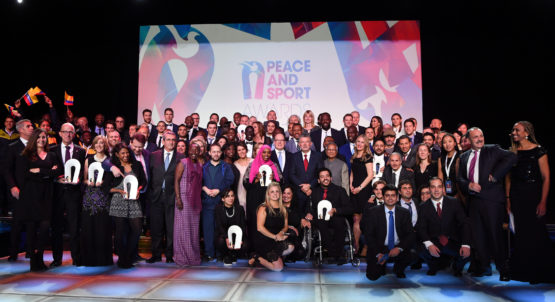 Former Afghanistan national women’s team captain, Khalida Popal, has been named the Champion of the Year at the 2017 Peace and Sport Awards, following her lifelong journey to use sport as a tool for peace in her war-torn home nation.

Defying Taliban law at the age of 16 in order to play football with her female friends at school, Popal became a figurehead for women’s sport in Afghanistan, inspiring girls around the country to find enjoyment and escapism through sport.

Just 12 years on, from her act of defiance, women’s sport in Afghanistan is flourishing. With professional leagues now common place, Popal has changed the lives of countless women throughout the conflicted nation.

Elsewhere, FC Barcelona’s Foundation was named Foundation of the Year for their refugee programme, which intervened and helped to save lives in Greece, Italy and Lebanon, while the World Badminton Federation (WBF) took home Federation of the Year for their Shuttle Time Connect initiative, which created a sporting and cultural exchange between children in Asia and Australia.

A full list of winners can be found below.

“What a special evening, celebrating all those who have made such a huge contribution to the peace-through-sport movement over the past year. We have recognised some inspiration winners here tonight, but really everyone who has helped to change a life is a winner. This is a collaborative effort, and together we must move forward as one and achieve our goals.

“I also would like to congratulate Khalida Popal. Her story is truly an inspirational one, and she has been on an incredible journey to fight for what she believes in. She is a true testament of the power of sport for peace.”

Before the announcement of the Awards, Didier Drogba delivered a speech to the delegation about his work on social causes, before a special session took place that saw Nobel Peace Prize Laureate Professor Muhammad Yunus take to the stage to discuss the Yunus Centre’s new partnership with Peace and Sport and the power of sport and social business to foster social change.

The partnership, announced on day one of the Forum, will see Peace and Sport set up a Social Business Fund in Monaco, which will raise money to then be invested in entrepreneurs often too poor to afford a bank loan.

“The sports world can be a part of true change around the world. Young people make change, and the impact that athletes can have on the mind of all young people is incredible. Athletes are so precious to young people, they are their idols, so athletes can play a huge role in change.

“By definition, athletes push boundaries, they create new success. They drive change. I am so happy to be here among all of these Champions, and I thank Mr Bouzou for inviting me to become a part of Peace and Sport.”

For further downloadable images from throughout the 2017 Peace and Sport International Forum, please use the following link: https://www.flickr.com/photos/136481143@N07/

A link to the downloadable VNR of the diplomatic kickboxing event can be found here:

After an exchange of gifts, the fights took place under the eyes of the participants, Joel Bouzou, President and Founder of Peace and Sport and the President of the WAKO Federation, Borislav Pelevic.

The Peace and Sport International Forum has provided a neutral framework for this fight. The aim was to promote the unique power of sport, to unite people and to create a dialogue beyond political, religious or ethnic differences.