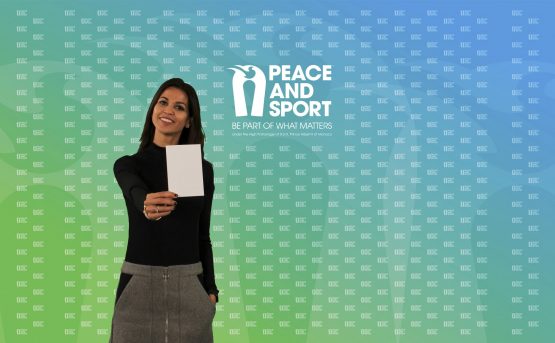 Herculis 2017: Champions for Peace on the Starting Blocks

The Herculis Meeting held on 21 July in Monaco invites Peace and Sport to meet athletes to tell them about the importance of sport as a tool for peace. In partnership with the Monaco Athletics Federation, a #WhiteCard operation took place this morning.

A number of #WhiteCard pictures were taken with high level athletes such as Shawn Barber(Canada), current reigning World Champion in pole vault, and Francine Niyonsaba (Burundi), Vice-Olympic Champion in the 800 meters.

Two Champions for Peace are involved with Peace and Sport to participate in mobilising athletes. Habiba Ghribi attend the Herculis meeting but, unfortunately, she won’t be able to participate in the 3,000 metres, for which she has been training so hard over the past few months. Despite her injury, she made the trip to carry a message that is so important for her. She says “Sport enables you to surpass yourself and exceed the limits that society can impose on individuals. Sport is a universal language that brings people together around the values of sharing, respect for the rules and the opponent regardless of social or cultural origins.”

Paula Radcliffe holds the world record for the marathon. As a Champion for Peace, she now wants to pass on her experience. According to her “Sport is a universal school for humility. It offers a framework for development through clear rules. “She is back from Nairobi where she attended the World Junior Athletics Championships and voiced her support for the cause of refugees.

Usain Bolt is a major name on the line-up, running one of the last races of his career. The Jamaican athlete actively contributes to the peace through sport movement through his Foundation “to provide a legacy for happy children (…), to enhance the character of children through educational and cultural development, as they live their dreams”.

Herculis is an international Track and field meeting that is organize every year since September 1987 in the Stade Louis-II of Monaco. Since 2010, it is part of the 14 IAAF Diamond League meetings. It was ranked among the world best meetings in 2011 and 2014. The Monaco Athletics Federation seeks above all to promote athletics, as the country’s sovereign is very attached to sporting values and makes it a point of honour that the Principality is “a sports centre of great importance.” Prince Albert II has presided over the Monegasque Athletics Federation since its inception and is the High Patron of Peace and Sport.