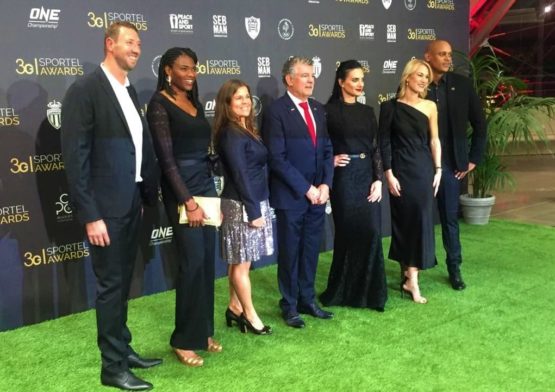 For the fifth consecutive year, the winner of Peace and Sport Documentary Prize was announced at the Sportel Awards, on Tuesday October 22, in Monaco. The jury, made up of Champions for Peace, has chosen to reward Jaime Murciego Tagarro for his 20-minute documentary “Boxgirls”.

Marc Raquil, athletics world champion and Champion for Peace, presented the Peace and Sport Documentary Prize during the Sportel Awards ceremony and rewarded Jaime Murciego Tagarro’s film “Boxgirls”. The documentary gives a unique insight on Kariobangi neighborhood in Nairobi, Kenya were girls and women face poverty, crime, drugs, rape and other violations. The female boxers of “Boxgirls” try to overcome this situation through physical and mostly mental skills that boxing gives to them.

Two other films were competing for the Prize. “Afghan Cycles” by Sarah Menzies follows a new generation of young Afghan women cyclists. This film tells a story of women’s rights and the struggles faced by Afghan women on a daily basis, from discrimination to abuse, to the oppressive silencing of their voices in all aspects of contemporary society. “Streetkids United 3 – The Road To Moscow” by Jacco Groen and Jamillah van der Hulst, is the empowering story of nine Indian girls who are chosen by Karunalaya Social Service Society to represent their country at the Street Child World Cup 2018 in Moscow, Russia.

Marc Raquil, athletics world champion and Champion for Peace, said: “Sport is a universal language and films have the capacity to reveal emotions, tensions and values that sport can spread. We received very inspiring applications and it was a great pleasure to watch these magnificent documentaries which demonstrate that sport is a sustainable tool to address social issues.”

Last year, the winner was Jamillah Van der Hulsts’s film “Fighting for Life”. The documentary gives a unique look inside the South-African prison Drakenstein Correctional Center and the impressive work of Dutch boxing coach Sharita van der Hulst in the rehabilitation program for prisoners that are serving heavy sentences. In 2017, “Girl Unbound: The War to Be Her” was awarded. This film explores the world of Maria Toorpakai Wazir, international champion of squash and Champion for Peace. In Waziristan, a mountainous region of Pakistan, Maria defies the Taliban by disguising herself as a boy so she can play sports freely.

Since 2014 in partnership with the Sportel Awards, Peace and Sport rewards directors who are tackling themes to demonstrate that sport can actually move barriers and norms in society.