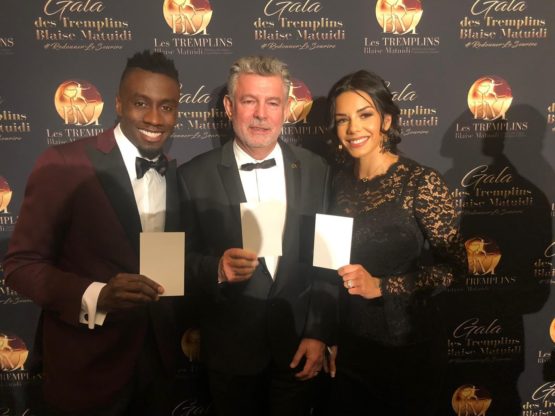 Champion of Peace Blaise Matuidi and his association “Les Tremplins Blaise Matuidi” organized on Sunday their first charity gala at Disneyland Paris. The objective: to raise funds to continue the construction of an orphanage in the Democratic Republic of Congo. Peace and Sport took part in the event to encourage sportspersons to get involved in social causes like Blaise Matuidi.

The main event of the evening was an auction of items that belonged to the 2018 world champion and some of his team-mates from the French national team, Juventus and PSG. The aim was to raise as much money as possible to continue the construction of an orphanage in the Democratic Republic of Congo. On this occasion, Blaise Matuidi recalled his commitment to the peace-through-sport movement by taking part in a symbolic #WhiteCard photo with Joël Bouzou, President and Founder of Peace and Sport.

For him: “It is very important to participate in events organized by our Champions for Peace. Blaise has long been involved in social and educational projects. This fundraising evening for the construction of an orphanage in Congo illustrates the concrete impact that an internationally renowned sportsman can have for the benefit of underprivileged children. »

Created in 2016 by Blaise Matuidi, the association “Les Tremplins Blaise Matuidi” works for deprived children and children in difficulty. Its main mission is to “bring a smile back to the children’s faces” through various charitable and solidarity actions. Thus, the football player and his association organize several events every year, such as football tournaments in Clairefontaine, visits to children’s hospitals, but also concerts.

In 2018, world football champion Blaise Matuidi joined the Champions for Peace club with Peace and Sport to reinforce his social commitment and the actions carried out by his organization, the Tremplins Blaise Matuidi. The Champions for Peace club gathers over 110 high level sportsmen personally committed to the peace-through-sport movement. They dedicate their time, their fame, and their athletic experience to serve projects which use sport to tackle social issues.