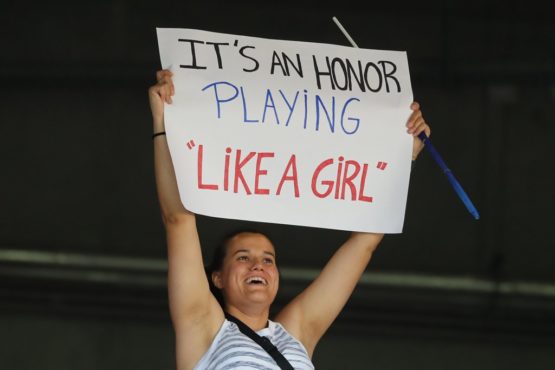 Gianni Infantino was never going to describe it as anything other than the “best women’s World Cup ever”, but the success of the landmark tournament in France has shown the potential women’s football has to keep on growing.

The last month has drawn the spotlight onto the game like never before, with attendances in France generally excellent and numerous countries registering record television viewing figures.

Among those, 11.7 million British viewers watched England’s semi-final defeat by the United States, the biggest UK television audience of the year.

In has all been a far cry from the first European women’s World Cup in 1995, when 3,824 fans saw the tournament’s opening game between Germany and Japan, and England’s first match drew 655 spectators.

The ever increasing levels of professionalism have contributed to often outstanding matches, although female refereeing is still catching up and the use of Video Assistant Referees has regularly been controversial.

The enormous chasm remaining between the developed nations and those on the fringes was exposed when the USA inflicted a World Cup record 13-0 hammering on Thailand in the group stage.

At the time, Megan Rapinoe, the biggest star of this World Cup, insisted such a mismatch was “part of growing the game”.

Ahead of the final, she said there was a simple way to keep the global women’s game moving forward. “Money, money, money,” exclaimed the 34-year-old.

“I think the women’s game has proven time and time again, World Cup after World Cup, that we are worthy of the investment, and that the quality on the field is there.”

FIFA chief Infantino has proposed investing a further $500 million between now and the next World Cup in 2023, which will be increased to 32 teams if he gets his wish.

Whether that is good for the USA is another matter. They have been the dominant force in international women’s football, but Europe is on the rise.

The continent’s leading men’s clubs are investing more and more in women’s teams, driving up standards. Real Madrid are the latest to get on board.

Seven of the eight quarter-finalists in France were European, with European champions the Netherlands reaching the final little over a decade after starting their own women’s league.

“In America it was already big obviously but seeing in Europe the growth, it’s incredible,” said Dutch defender Dominique Bloodworth. “Hopefully we can inspire a lot of young girls to also go and play football and see what can happen, and a lot can happen.”

Much has been made of this World Cup having a similar impact on Europe as the 1999 tournament did on the USA, who won it as hosts.

“I saw that in 1999, that attitudes to the sport changed considerably with it being in the US. The challenge is to keep that flame burning,” Derek Rae, a vastly experienced commentator for US network Fox Sports, told AFP.

The challenge more generally is to ensure fans continue to flock to stadiums and watch games on television once the World Cup has gone away.

Even with the presence of Lyon, Europe’s best club side, Le Graet admits average attendances in the French league are “about 400 on a good

In England, Manchester United’s promotion to the Women’s Super League (WSL) can only help grow its profile. Meanwhile, a feasibility study is ongoing into the possibility of the Premier League taking over the WSL.

“I think the Premier League are looking at English women’s football now as something that they need to get to get on board with,” said England coach Phil Neville.

Infantino also spoke of starting a women’s Club World Cup, and US soccer will hope a new domestic broadcast deal announced this week with ESPN will help them stay ahead of the game.

“World Cups and Olympics and big moments like this always provide that extra boost and you know it’s going to go up to a level that it’s not going to sustain, but we hope that this time it gets there and levels out a bit,” said Rapinoe.