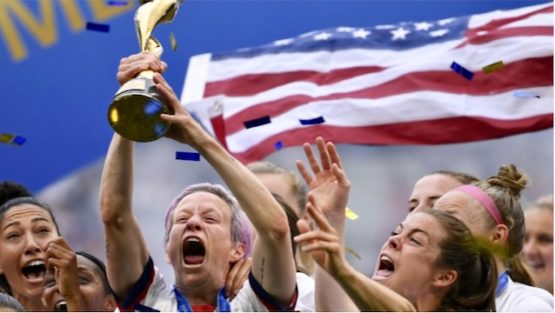 The union representing players on the US men’s football team Tuesday slammed “false accounting” used by US Soccer president Carlos Cordeiro in claiming the federation had paid women players more than men.

Cordeiro made the claim on Monday in an open letter to federation members, with mediation looming in a federal lawsuit brought by players on the women’s team that accuses the federation of “institutionalized gender discrimination” that includes inequitable compensation when compared to players on the men’s national team.

“This is more of the same from a federation that is constantly in disputes and litigation and focuses on increasing revenue and profits without any idea how to use that money to grow the sport,” the men’s players’ union statement said. “The women’s national team players deserve equal pay and are right to pursue a legal remedy from the courts or Congress.”

The issue was center stage as the United States triumphed in the Women’s World Cup in France in July, chants of “equal pay” raining down on the champions after they defeated the Netherlands in the final.

Lawyers for the women players filed a lawsuit on March 8 demanding equal pay and conditions to their less successful male counterparts.

US lawmakers have proposed legislation that would block federal funding for the 2026 Men’s World Cup — to be hosted jointly by the United States, Mexico and Canada — until the federation pays its women’s national team “fair and equitable wages.”

Cordeiro said Monday that, in fact, women players were paid $34.1 million by the federation from 2010 to 2018 in salaries and bonuses — including National Women’s Soccer League salaries for national team members — while members of the men’s national team were paid $26.4 million over the same period.

The figures did not include bonuses received by US Soccer from FIFA for World Cup performances because, Cordeiro said, the federation couldn’t be held responsible for the disparity in those sums.

When the bonuses are included, members of the men’s team earned a combined $41 million between 2010 and 2018, while the women received $39.7 million.

The women have won back-to-back World Cup titles while the men failed to qualify for the 2018 World Cup in Russia.

Molly Levinson, a spokesperson for the women players, called the figures cited by Cordeiro “utterly false” and said inclusion of the NWSL salaries inflated their compensation.

“Any apples-to-apples comparison shows that the men earn far more than the women,” she said.

The men’s players’ union also said the figures were suspect.

“The Cordeiro letter includes the claim that the USWNT lost $27 million over the past 11 years, but admits that is based on false accounting because the Federation ‘traditionally’ does not count any of the sponsorship, television, or marketing money the Federation generates from USWNT and USMNT players and their games,” the statement said.

“What US sports team makes money if they don’t count television, sponsorship and marketing revenue?”