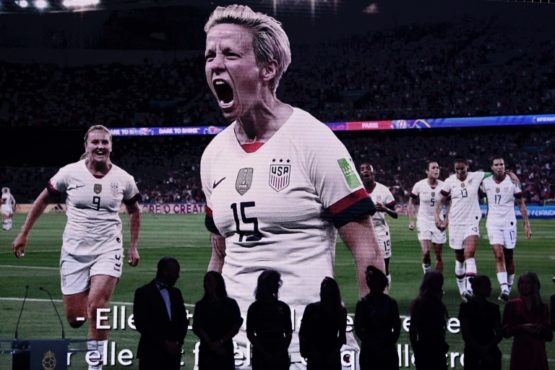 Megan Rapinoe completed an unprecedented clean sweep of honours on Monday as the trailblazing World Cup star and feminist icon added the Women’s Ballon d’Or to her collection of accolades.

The 34-year-old striker was the star of this year’s Women’s World Cup, scoring six goals as the United States successfully defended their title.

Rapinoe’s tournament goals tally earned her the Golden Boot for top-scorer while she was also awarded the Golden Ball for the best player.

Rapinoe had already picked up the FIFA’s Best Women’s Player award in September, and it was inevitable she would claim what was only the second edition of the Ballon d’Or Feminin, won by Norway’s Ada Hegerberg in 2018.

“It’s been an incredible year,” Rapinoe said in a recorded video message shown at the ceremony at the Chatelet Theatre in Paris, having been unable to travel to the event.

“I want to say a huge thank you to my team-mates, the coaches, the US Soccer Federation, for all of the support to allow me to be who I am and do what I do on the field but also be the person who I am off the field.”

The honour crowns a remarkable year for Rapinoe which has seen her enhance her reputation as a warrior both on and off the pitch.

Her performances at the World Cup were a critical part of the United States’ title defence, but Rapinoe has garnered almost as much attention in 2019 for her unflinching advocacy of social justice off the field.

That readiness to speak her mind famously brought her into conflict with US President Donald Trump during the World Cup.

Rapinoe had provoked Trump’s ire in comments made several months before the tournament when she stated bluntly that she would not attend a White House reception for the US team if they brought home the World Cup.

“I am a big fan of the American Team, and Women’s Soccer,” Trump wrote on Twitter. “But Megan should WIN first before she TALKS! Finish the job!”

Rapinoe did finish the job several days later, scoring the opening goal in a 2-0 defeat of the Netherlands in the final in Lyon.

Since then, Rapinoe has happily kept on talking.

At a victory parade in New York in July, Rapinoe, who is gay, saluted the diversity of the all-conquering US team while calling for unity.

“We have to be better,” Rapinoe told a cheering crowd of thousands. “We have to love more, hate less. We got to listen more and talk less.

“It’s our responsibility to make this world a better place,” she added.

Rapinoe returned to that theme at a recent awards ceremony, when she was honoured as one of Glamour magazine’s “Women of the Year”.

She used the event to draw attention to the plight of former San Francisco 49ers quarterback Colin Kaepernick, who ignited controversy in 2016 after kneeling during the US national anthem in a protest against racial injustice.

Rapinoe was one of the first athletes to kneel in solidarity with Kaepernick, who has effectively been frozen out of the league since his season of protest.

Rapinoe said Kaepernick’s plight made her determined to continue her fight for social justice and equality.

“It would be a slap in the face to Colin, and to so many other faces, not to acknowledge, and for me personally, to work relentlessly to dismantle that system that benefits some over the detriment of others, and frankly is quite literally tearing us apart in this country,” she said.

Back in the sporting arena, Rapinoe has eased her way back into the fray.

Exhaustion and a sore achilles left her sidelined until September, when she returned to play for Seattle’s Reign FC in the National Women’s Soccer League.

Meanwhile, she returned to the US team for two October friendlies against South Korea, and is expected to be a key member of the US squad for next year’s Olympics, where she will be chasing a second gold medal.