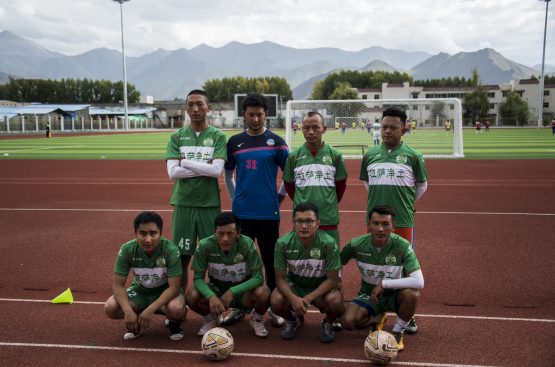 Officials hope the highest club in China, which was established last year, can break down barriers in the mountainous region, where relations with Beijing have sometimes been strained since its “peaceful liberation” in 1951.

“In the club today, there’s no discrimination. The atmosphere is great,” said Tibetan player Luosang, a former gym teacher who has emerged as one of the team’s leading lights.

One problem: at 3,700 metres (12,140 feet) above sea-level, altitude sickness is a constant hazard for non-Tibetans — and is deterring Han Chinese players.

“Recruiting them is difficult,” admitted club president Cidan Duoji, an ethnic Tibetan. “They think that it’s dangerous to play football here because of altitude sickness.”

Native Tibetans have adapted over generations to the lack of oxygen at high altitudes, which can cause headaches, vomiting, insomnia, or fatigue, and makes playing sports difficult for outsiders.

Consequently, only 10 percent of Lhasa FC’s squad are Han Chinese, although members of the ethnic group are numerous elsewhere in the regional capital, which sits on the Tibetan Plateau.

“Lhasa FC… is a place of cultural exchange for the two communities,” said Cidan, surrounded by the club’s red mascots. “We want to show that Tibet can also be a place for sports,” he added.

The club’s stadium may be one of the most remote in China but it is also among the most picturesque, with its main stand facing the snowy peaks of the Himalayas.

The tranquil setting belies a troubled past.

Beijing reaffirmed control over Tibet in 1951 after four decades of de facto independence for the Himalayan territory.

Since then, many ethnically Han Chinese immigrants — the country’s largest group by far — have moved to Tibet, where they remain a minority.

In 2008, demonstrations by Tibetan monks in Lhasa degenerated into deadly violence targeting Hans before being quelled.

Many Tibetans accuse Beijing of exerting heavy control over their Buddhist religion, diluting their culture, and exploiting natural resources at the expense of the environment.

Although Lhasa FC lacks diversity on the pitch, the hope is that having a team in a national league will make Tibetans feel more integrated into China.

Lhasa FC currently play in China’s amateur league, the country’s fourth-tier football competition and a world away from the moneyed Chinese Super League with its millionaire players and tycoon owners.

Nevertheless, Cidan is bullish — perhaps hoping that Lhasa’s altitude will give his team an advantage in home games.

“We hope to reach the Chinese Super League and even beat Guangzhou Evergrande!” he said, referring to the five-time defending champions and double Asian title-holders.

Soccer arrived in Tibet at the beginning of the 20th century with the British army, but before Lhasa FC’s founding the vast region was bereft of clubs.

“Football is booming now, with a growing number of competitions organised every year,” says Luosang.

China has previously used sport as a political tool, including the “ping pong diplomacy” of the 1970s and the 2008 Beijing Olympics, where China showcased its newfound economic might.

China is also embracing football like never before, with President Xi Jinping heading a drive to host and even win the World Cup — a tall order for a country which is now just 78th in the FIFA rankings, sandwiched between Saint Kitts and Nevis and Guatemala.

Overseas or exiled Tibetans have also looked to the sport as a way to promote their cause. Last year, a women’s team of India-based Tibetans played Chinese university students at a tournament in Berlin.

And a ‘Tibet national team’ not affiliated with FIFA and supported by the self-declared Tibetan government in exile — which resides in India and opposes Beijing’s rule — has played dozens of matches against other non-recognised teams since 2001.

Just like China’s top clubs, such as Guangzhou Evergrande and Jiangsu Suning, Lhasa FC has a corporate founder: the Tibet-based state-owned enterprise Pureland, which sells local specialities including traditional medicines and mineral water.

“But running a club in Tibet is economically risky,” notes Jin Shan, a sportscolumnist. “The region has few developed cities, and the football market is still small.”

“In short, the return on investment is far from guaranteed.”