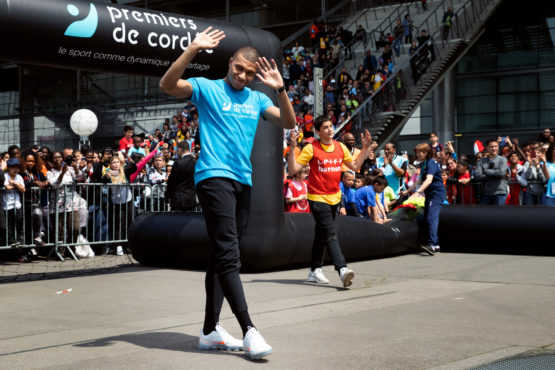 French world champion Kylian Mbappé, one of the new stars of world football, formalized the launch of his association to “inspire” 98 young children and help them fulfill “their dreams” on Monday in Bagnolet (Seine-Saint- Denis).

Called “Inspired by KM”, the association aims to promote the success of 98 young children – “a wink” at their birth year – as many boys as girls aged 9 to 16 and from all “different social backgrounds”, until their entry into working life.

“Since I was a child, I have always dreamed. Now that I am in this place, I want to give back to the youngest,” said Kylian Mbappé during a presentation evening near Paris.

“We are not there to sell the dream but to support them and help them build them. We will do everything to help them achieve it,” he added in the presence of the young beneficiaries, his relatives and a flowerbed. prestigious guests such as Nathalie Boy de la Tour, President of the League, Leonardo, sports director of PSG, or Vadim Vasilyev, the former vice-president of Monaco.

Kylian Mbappé will be accompanied by a team of a dozen people, notably from the world of education, and his partners Nike, Hublot, Good Goût, and Bulk Homme, all committed financially to the project.

Sponsor of the association “Premiers de cordée”, which notably offers sports initiations for hospitalized children, Mbappé had still not founded his own charitable organization since its revelation in the eyes of the general public in 2017.

The world champion (21 years old) also participated last year in the annual Gala des Enfoirés, alongside Didier Deschamps, the coach of the French football team, to represent the sports world.

In the aftermath of the coronation at the 2018 World Cup, “KM” had also decided to pay almost all of its victory bonus, estimated at 400,000 euros, to different associations.

According to Team Magazine, the PSG star, followed by more than 40 million “followers” on social networks, had annual revenues estimated at 24 million euros in 2018.