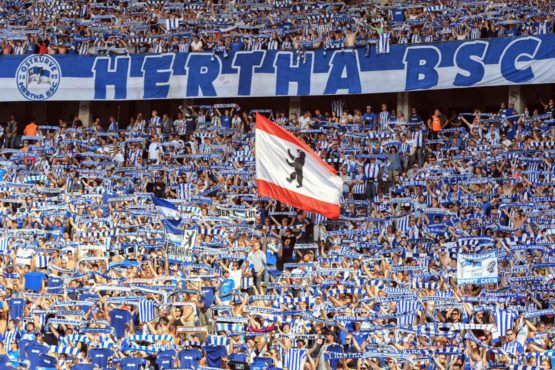 Berlin, Three decades after the fall of the Berlin Wall, the German capital’s FC Union and Hertha Berlin will meet for their first Bundesliga derby, with fans wondering if a real rivalry will grow or if the spirit of reunification will prevail.

Union and Hertha’s stadiums are 26 kilometres (16 miles) apart, but the Iron Curtain that divided communist East Germany from capitalist West Germany had kept the two clubs at a much bigger distance.

“It will be a very special game, especially as it comes 30 years after the fall of the wall,” Werner, who has carried Union membership card number 467 since 1979, told AFP.

Saturday’s game will be only the fifth competitive match between the two Berlin clubs.

Their first meeting was on January 27, 1990, when Hertha hosted a friendly at the Olympic Stadium 79 days after the Berlin Wall fell.

A capacity crowd of 52,000 sang on the terraces about Germany’s imminent reunification as Hertha won 2-1.

It would be 20 years before the clubs met in a competition. They played four times in Bundesliga II after Hertha were relegated in 2010 and again in 2012. Union did not win any of the games as Hertha bounced straight back to the top division both times.

This weekend the two sides are playing their first top division derby after Union won promotion for the first time last season.

– ‘Not enemies’ – Ahead of Saturday’s historic game, Andreas Cramer, 60, was at Union’s fan shop buying giant posters which he plans to plaster along the streets to greet fans heading to their homeground stadium Alte Foersterei at the leafy Berlin suburb of Koepenick.

But the provocation against blue-and-white-clad Hertha fans will stop there, long-time Union fans said.

“We have a friendship with Hertha, they’re not enemies,” said Cramer, a Union fan for “more than 40 years”.

“For us, this is not a derby but a city championship.

” While football’s top derbies are often marked by deep enmity and ending in violence and chaos, Saturday’s meeting of Berlin’s crosstown rivals appears set to take on an unusually warm atmosphere.

Underlining the friendliness, Werner noted that among anthems sung by fans of both sides before reunification was one declaring that “we hold together like the wind and sea, the blue-white Hertha and FC Union”.

West Berlin-born Hertha fan Manon Duering, 55, also said she “was delighted when Union came up” to the top division.

“I grew up with the Wall. I was in my 20s when it came down. Berlin offers so much, but it needs a stronger football culture,” she said.

“It sounds idealistic, but my wish is Union will grow a little with Hertha, who can also benefit from Union. Football isn’t as important here as in other cities.” Union have always been viewed favourably as the east German anti-establishment club, a likeable alternative to Dynamo Berlin, linked to the hated Stasi secret police.

Many of the songs Union fans sing are aimed not at West Germany’s Hertha, but at Dynamo, who won 10 consecutive league titles from 1979 to 1988 but now languish in Germany’s fourth division.

– ‘Living symbol of history’ – Despite the warm words from both sides, police will be on high alert as around 22,000 fans pack into Union’s ground, as Duering admits, “no one knows what will happen”.

Cramer also noted that while old-timers like him had a fraternal feeling towards Hertha, “it is different with the younger generation — the younger ones can’t stand Hertha”.

Union fan Daniel Rossbach voiced hopes that the derby will not “grow vicious”, but it will “always be a rivalry”.

Timo Dobbert, a Hertha fan for 30 years, also hopes the derby can grow into something reflecting Berlin’s chequered history.

“It would be great if Berlin were the only city in Europe where both clubs and fan groups support and celebrate each other,” he said.

The Berlin derby “could become a living symbol of the city’s history, divided, then reunified, that you wouldn’t find anywhere else.”