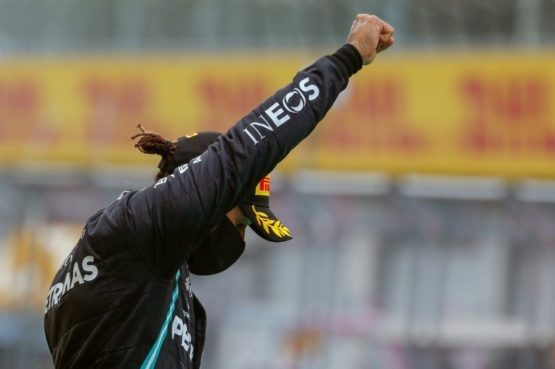 Lewis Hamilton said Thursday he would remember raising his fist to make a black power salute after winning last Sunday’s Styrian Grand Prix for the rest of his life.

Speaking during a video conference ahead of this weekend’s Hungarian Grand Prix, the six-time world champion said he was inspired by the image of Tommie Smith and John Carlos giving their famous black-gloved salute at the Mexico 1968 Olympic Games.

“I just took a page out of their book,” he said. “Realising that I have this platform, I have this opportunity to continue to raise awareness and try and unite people, to try and educate myself, but also educate other people and that was really where it came from.

“It felt like the right moment. It felt an important moment for me. I’ll never forget that moment.”

He said he had learned of their action and could remember “seeing and reading about their experience and seeing the iconic image of their salute –- and that was inspiring for me”.

“Racism is something that has been around for hundreds of years and currently continues,” he added. “When you’ve got icons, people like that who’ve stood up against this battle, I just find it inspiring.”

Hamilton made clear this week that he remains hopeful that all 20 Formula One drivers will take a knee together before a race, but said he did not know what possibilities may arise ahead of this Sunday’s contest at the Hungaroring.

Sixteen drivers took a knee and four did not at the season-opening Austrian Grand Prix, but fewer did so at the second race when some racers were late to the grid and the television coverage cut to a Red Bull advert after only a few seconds.

After his dazzling win in Austria, Hamilton will be seeking another –- his eighth at the Hungaroring circuit — to overhaul Mercedes team-mate Valtteri Bottas and secure the lead in the title race on Sunday.

Finn Bottas indicated Thursday that he is poised to re-sign with Mercedes for 2021.

“We are talking about it and, obviously, nothing is signed yet, but things are moving in the right direction,” he said.