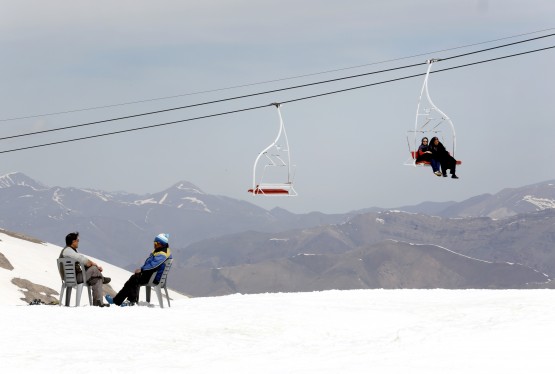 The expedition by geologists, businessmen, mountaineers and environmentalists was also a chance to showcase Iran’s huge under-used tourism potential and welcome the return of French mountain conservation to the country, said Frederic Burnier Frambonet, who led the French team.

Almost exactly a year since world powers reached a nuclear deal with Iran and agreed to lift sanctions, France has been one of the most eager to restore ties with the isolated Islamic republic.

“The expedition is a direct result of the nuclear accord,” said Frambonet.

Iran hopes that tourism can become a second pillar of the economy after oil.

The Alborz mountain chain, that includes Damavand and overlooks Tehran, currently has only a handful of small ski stations, but has huge potential.

“There is the means to create mountain stations that could work during the summer as well as the winter for hiking and mountain biking,” said Frambonet.

Currently, the quickest way to access the ski slopes is a cable car from north Tehran to the Tochal ski resort at 3,800 metres that was built by a French company, Poma, in 1970, nine years before the Islamic revolution.

Poma is reportedly keen to return to Iran to upgrade the cable car, which was the longest in the world when it was built at 7.5 kilometres (more than four and a half miles).