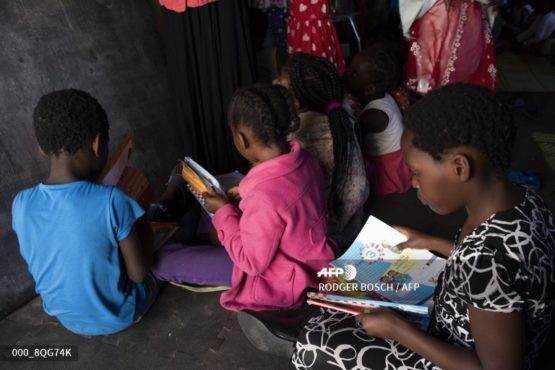 “The future is dark,” sighs Joachim Lobo, a teacher who longs “to pick up the chalk” and be reunited with his pupils, if ever peace is restored to northeastern Democratic Republic of Congo.

“I lost my job because of all this nonsense,” Lobo says of communal violence in the gold-rich Ituri province, where he taught French and philosophy, speaking with a restraint and modesty characteristic of Congolese people in the face of suffering.

“You see how we can be revolted.”

At 60, the father of nine children has become one of tens of thousands of civilians displaced in Ituri since the violence resumed in December 2017 in the Djugu and Mahagi areas.

In 2019, he fled Sombuso, his natal village in the ravaged Djugu territory.

Lobo lives today in a displaced persons camp at Loda, 20 kilometres (12 miles) from his home and located close to a base of the foreign troops serving in the UN mission in the Congo (MONUSCO).

The daily conditions are dire, he says. “No latrines, no food, no drinking water, no medical care.”

Lobo belongs to the Hema community, traditionally known as stockbreeders and traders, and he left Sombuso to escape the brutality of one wing of the Congo Development Cooperative (Codeco) created by Lendu people.

Experts explain that the Codeco appears to bring together several sects of militia fighters who claim to defend the property rights of the Lendu farming communities in the Djugu territory.

Lendu militias, known for animist beliefs and rituals, are held responsible for the massacre of several hundred Hema civilians.

This is not the first time that “Papa Joachim” fled violence in Ituri, to become a living memory of the wounds of two decades and more.

In 1999, he abandoned his home after the outbreak of the Second Congo War (1998-2003), which saw the armies of more than half a dozen African countries enter the vast DRC. Violence cost tens of thousands of lives in Ituri.

At the time, the Lendu and the Hema were killing each other in militia attacks, which were stopped in 2003 by Operation Artemis, a military intervention by a European Union Force (EUFOR) backed by the United Nations.

When violence resumed in 2017, there were marked differences from the wartime clashes.

The Hema have not reconstituted their militias and Lendu public figures condemn the raids committed in their name by Codeco forces.

Neighbouring Uganda appears to be playing no role across the border in Ituri, after being convicted by the International Court of Justice in 2005 of unlawful armed aggression and violation of territorial sovereignty during “Africa’s Great War”.

The court ordered Uganda to pay reparations to DR Congo, but today commerce in gold from Bunia in Ituri and Butembo in North Kivu province to Uganda’s Entebbe international airport is doing well, according to the NGO Impact, which seeks to help artisanal miners.

“The future is dark,” Papa Joachim says. “We thought we would have a responsible government, yet we don’t know when we can return to our land.”

Invested in January 2019, President Felix Tshisekedi denounced “attempted genocide” and a “plot” during a rare visit to Bunia in July that year, at the height of an outbreak of violence.

He announced a “large-scale” military operation dubbed “Ituri Tempest” against the attackers, which led to the killing of a Codeco chief.

A year later, Tshisekedi despatched a delegation of former militia chiefs from the time of the Second Congo War to negotiate the surrender of pro-Lendu fighters.

The team was led by Floribert Ndjabu, a man who served 15 years in preventive detention on  suspicion of the murder of nine UN peacekeeping troops in 2005.

“I told them: ‘I was a rebel like you — you have nothing to teach me,'” Ndjabu said to AFP.

The outcome of talks has been a noticeable decline in the number of deadly raids, according to the testimony of witnesses.

Key roads that had been blockaded, such as the RN27 linking DR Congo and Uganda, are once again open to traffic but the vehicles are escorted by the military, AFP saw.

Part of the population remains sceptical about any peace process.

“We need military pressure, with means sufficient to allow the army to secure the population and enforce peace, while justice should take care of the criminals,” said Agathe Gipatho, a 60-year-old peasant woman, during an exchange with members of the Alur community in Nioka.

“People are tending to return to their villages,” said Dieudonne Kpadyu Mnyoro. “But their key concern is safety, an end to the violence.”

A trader and chief of a Hema village, Mnyoro and more than 1,200 families took refuge last March in the ruined buildings at Fataki, a Roman Catholic parish destroyed in the Second Congo War.

In Ituri, religious edifices are like men and women. They all bear the scars of conflict