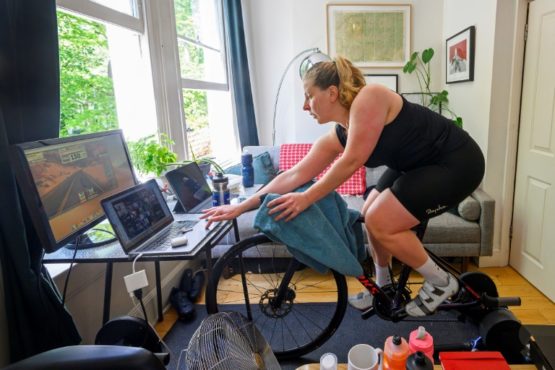 Ultra-endurance cyclist Laura Scott has shrugged off recent injuries to join a huge “virtual peloton” from her living room to raise money for Britain’s National Health Service during the coronavirus lockdown.

The Around the World in One Day event held on Thursdays brings together hundreds of cyclists to replicate a day in the life of Mark Beaumont’s record-breaking circumnavigation of the globe in 2017.

Beaumont is leading the fundraising charge for NHS Charities Together, along with female record holder Jenny Graham. Rowers are also taking part.

Canadian-British rider Scott only decided to do the whole 240-mile (386-kilometre) distance on Wednesday and was scrabbling around for energy-boosting food right up until the last moment.

“It was probably one of the tougher things I’ve done,” she said after the 13-hour marathon. “When you ride outside, the scenery changes and you get a break from pedalling if you go downhill.

“I usually complain to my coach if an indoor training session goes on for more than an hour.”

In 2016, Scott took part in the Trans Am Bike Race, completing 2,200 miles with a dislocated shoulder and fractured collarbone after being hit by a car on day one, before being forced to pull out.

Two years later she competed in the TransAtlantic Way, a 2500-kilometre race in Ireland but she has been badly hampered by injury over the past year.

Scott, 35, has been riding about an hour a day for four or five days a week during the coronavirus lockdown but Thursday’s event was a huge step up in distance.

She started her ride at 4:00 am and initially broke it up into four-hour chunks, needing more breaks towards the end.

“It was good to start off with but I think I hit about 200 miles and the last 40 miles were tough,” she said.

“I tore ligaments in my ankle in December. I have had six months off my bike until four weeks ago and lots of my energy gels had expired.”

To register, visit worldinaday.com or keep in touch on social media via @worldin1day.