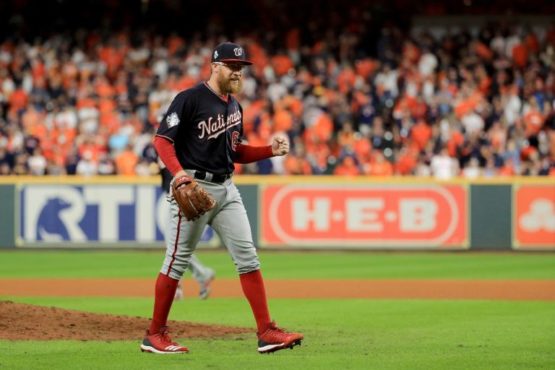 Doolittle, a key part of the Nationals’ World Series victory over Houston, is the first player to publicly decline the White House invitation accepted by the team on Friday.

“There’s a lot of things, policies that I disagree with, but at the end of the day, it has more to do with the divisive rhetoric and the enabling of conspiracy theories and widening the divide in this country,” Doolittle told the Post in explaining his decision.

The 33-year-old closer has long been known for his liberal beliefs, and has supported immigrant groups in the past.

Doolittle and his wife hosted a Thanksgiving holiday dinner for 21 Syrian refugee families in 2015.

Doolittle also cited Trump’s mocking of a journalist with a disability at a rally in 2016 as a reason for his decision.

“I think that’s an important part of allyship, and I don’t want to turn my back on them,” Doolittle said.

“I have a brother-in-law who has autism, and (Trump) is a guy that mocked a disabled reporter. How would I explain that to him that I hung out with somebody who mocked the way that he talked, or the way that he moves his hands? I can’t get past that stuff.”

Doolittle added that he had thought long hard about rejecting the White House invite.

Trump has had an uneasy relationship with the sports world since taking office, with several championship-winning teams including the NBA’s Golden State Warriors and the NFL’s Philadelphia Eagles opting to skip the tradition of visiting the White House after their victories.

Most recently, Trump crossed swords with the World Cup-winning US women’s soccer team, clashing publicly with star Megan Rapinoe during the tournament. The team has said it would not attend a White House reception if invited.

During the World Series, Nationals fans booed and jeered Trump when he attended game five at Nationals Park last Sunday, with sections of supporters chanting “Lock Him Up!”.