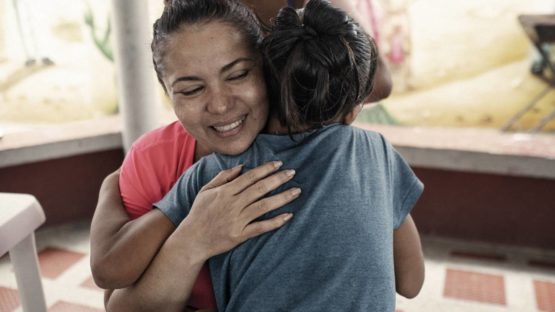 The UN refugee agency hailed Vergara Perez, known as Maye, for going to “extraordinary lengths” to rescue child victims of sexual abuse and exploitation, and for championing harsher penalties for perpetrators.

Maye is the Caribbean regional coordinator for the Renacer Foundation, which has assisted more than 22,000 child and adolescent survivors of commercial sexual exploitation in the past three decades.

Many of those helped have been refugee children, said UNHCR, whose annual Nansen prize honours extraordinary service to the forcibly displaced.

“People like Maye represent the best of us. Her bravery and selfless pursuit to rescue and protect some of the world’s most vulnerable children is nothing short of heroic,” said UNHCR chief Filippo Grandi.

“She embodies the essence of this award. Her unwavering dedication has saved the lives of hundreds of refugee children and restored their hopes for a better future.”

“On foot, she combs the streets of remote communities in northeast Colombia where human traffickers and smugglers operate,” it said.

In 2009, her advocacy led to two new laws, leading to harsher penalties for enablers of child sexual exploitation.

“Their bodies have been so maltreated, so abused, so exploited that they feel alienated from those bodies, as if they don’t belong to them.”

The award ceremony will be held virtually on Monday. Hosted by Mexican actor Alfonso Herrera, it will feature a keynote speech by Chilean novelist Isabel Allende, a former refugee.

Instituted in 1954, the award includes a commemorative medal, plus $150,000 donated by Switzerland and Norway to fund a project that complements the winner’s existing work.

The award is named after the Norwegian polar explorer Fridtjof Nansen, the 1922 Nobel Peace Prize laureate who was the first high commissioner for refugees for the League of Nations, the UN’s precursor.

Last year’s winner was Azizbek Ashurov, a human rights lawyer who fought to end the “phantom” status of stateless people in Kyrgyzstan.

Ashurov helped Kyrgyzstan to become the world’s first country to end statelessness. His organisation helped more than 10,000 people gain Kyrgyz nationality after they became stateless following the dissolution of the Soviet Union.