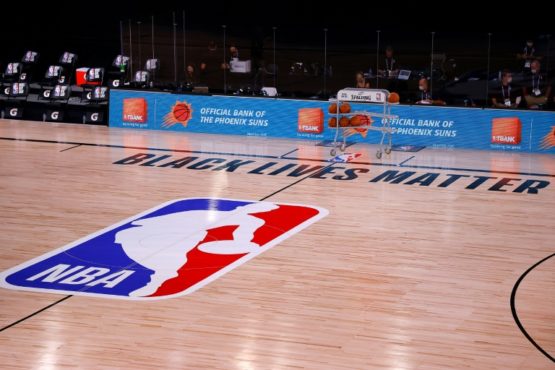 Milwaukee guard George Hill had more on his mind Monday than the Bucks’ NBA playoff win over Orlando, calling the police shooting of a black man in Kenosha, Wisconsin, “sickening.”

Hill said the shooting underscored the seriousness of continuing racial injustice in America, and he feared the resumption of the NBA season in a quarantine bubble in Orlando, Florida, left players without a way to stay engaged with the issue.

“We can’t do anything (from Orlando),” Hill said. “I think coming here just took all the focal points off what the issues are.”

Video showed police shooting Jacob Blake in the back in front of his children, the incident sparking violent protests in the city.

Blake, 29, was hospitalized and was reported to be out of surgery and improving on Monday evening.

A chorus of NBA players joined in condemning the shooting.

Los Angeles Lakers superstar LeBron James weighed in after the Lakers defeated the Portland Trail Blazers in their series.

“With me having two boys and me being an African American in America and continuing to see what is happening with police brutality against my kind.”

“It is very troubling. I am never going to lose track of what is going on in the world, especially here in America. My prayers go to that family.”

Donovan Mitchell of the Utah Jazz also spoke out on Twitter.

“THIS IS SICK AND IS A REAL PROBLEM WE DEMAND JUSTICE!” Mitchell wrote. “ITS CRAZY I DONT HAVE ANY WORDS BUT WTF MAN! THIS IS WHY WE DONT FEEL SAFE!!!!”

The shooting comes amid worldwide protests against racial injustice that followed the May killing of George Floyd, an unarmed Black man, by police in Minneapolis.

The NBA has embraced the Black Lives Matter movement during its restart, with social justice messages featuring heavily on the courts and on the uniforms worn by players.

The Bucks, whose home base of Milwaukee is 40 miles (64 kilometers) north of Kenosha on the shores of Lake Michigan, issued a statement on the Blake shooting.

“The Bucks organization is praying for the recovery of Jacob Blake, who was shot multiple times in the back by a police officer at point-blank range in Kenosha, Wisconsin, yesterday,” the Bucks said.

“We stand firmly against reoccurring issues of excessive use of force and immediate escalation when engaging the Black community.”