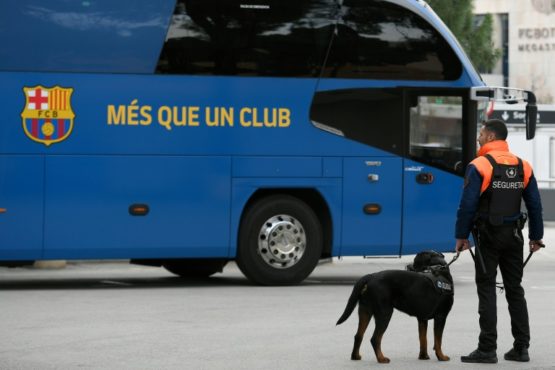 Barcelona and Real Madrid will tussle for top spot in La Liga on Wednesday as protestors threatened to use the most famous football match in the world to advance claims for Catalan independence.

From the early hours of Wednesday morning, a heavy deployment of police was visible around Camp Nou, where Barca will host Madrid in the season’s first Clasico at 1900GMT.

Police were also stationed outside the nearby Hotel Princesa Sofia, with players, coaching staff and referees instructed to gather there and then leave together for the match two hours before kick-off.

Around 3,000 security personnel will be posted around the stadium after renewed fears of unrest. The original fixture in October had to be postponed due to violent demonstrations breaking out across Catalonia.

“We know we are living in a complex social and political situation but I am convinced that it is compatible with playing a football match,” said the club’s president Josep Maria Bartomeu last week.

Democratic Tsunami, the protest group advocating another independence referendum for Catalonia, has called publicly for its supporters to gather at Barcelona’s Camp Nou stadium from four hours before kick-off.

Barcelona newspaper La Vanguardia claimed there were plans to throw inflatable balls onto the pitch to denounce the use of rubber bullets by police during the October riots.

“We accept the #ChallengeLaVanguardia and call on everyone to throw an inflatable ball and write a message to the world.”

Other posts from the same account added: “At 8pm, everyone will be able to see the match and the message ‘Spain, sit and talk’ will be transmitted around the world.

“The actions of today, like all of Democratic Tsunami’s, will be strictly non-violent.”

Barcelona had issued a statement on Tuesday night to fans planning to attend the game, advising supporters to use public transport, allow plenty of time and warning of “exhaustive security checks” at entrances to the stadium.

Barca also called for calm around the fixture, asking fans “to come to the game at Camp Nou on Wednesday to support the team”.

“The game between Barca and Real Madrid is a festival of football and yet it is without doubt also compatible with a civil and peaceful demonstration of opinion, given the exceptional circumstances faced in Catalonia in recent times,” the statement read.

By leaving from the same hotel, it means Madrid will be in a different place to their usual base in the city while Barcelona will arrive earlier than normal for a home match.

“It is a small change, but not very significant. When we play away, we are also in a hotel. It is not a big problem,” said Barcelona’s coach Ernesto Valverde on Tuesday.

Madrid coach Zinedine Zidane described the arrangements as “something different but the rules are the rules”.

Protests broke out in October after nine separatist leaders were sentenced to heavy prison sentences for their involvement in the independence referendum of 2017.

The Clasico was supposed to be played on October 26 but the RFEF decided to postpone “due to exceptional causes”.

“Football has to be for everyone, all over the world,” said Valverde on Tuesday. “People should be able to express themselves freely tomorrow, that is what we ask, but that there is respect for everyone. I believe that is the right thing.”

Meetings have taken place between the police, clubs and the Spanish Football Federation (RFEF) to ensure the safe arrival of the two squads and referees, as well as the nearly 100,000 fans expected to attend.

As well as the massive security presence in Barcelona, the numbers of private security staff in the stands will also be increased to reduce the threat of pitch invasions that could interrupt the game.

“The operation will ensure that the Clasico is played normally,” said the chief commissioner of the Catalan regional police Eugeni Sallent.

Democratic Tsunami hopes to transmit its message — ‘Spain, sit and talk’ — through the world’s most watched club football fixture, which has an estimated global audience of 650 million.

Barcelona have historically had a close association with Catalan nationalism, with Camp Nou routinely used as a setting for flags, banners and chants in support of the cause.

The club could suffer the consequences of any altercations or interruptions during the game.

At a meeting in Madrid last week, the RFEF warned it “will apply the regulations in force,” which range from heavy economic sanctions to the closure of Camp Nou to supporters.