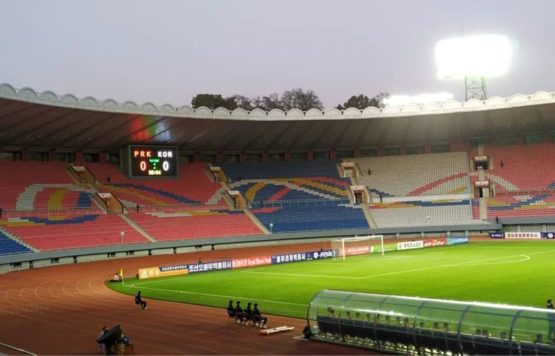 Kuala Lumpur, Oct 22, 2019 (AFP) – The final of an Asian club tournament has been moved from Pyongyang to Shanghai, football officials said Tuesday, a week after North and South Korea played out a surreal World Cup qualifier in an empty stadium.

The Asian Football Confederation (AFC) said it had been “compelled” to shift the November 2 AFC Cup match between North Korea’s 4.25 SC and Al Ahed from Lebanon to a “neutral venue” due to logistical and other issues.

Its statement did not mention the inter-Korean showdown in Pyongyang but said that commercial partners had warned of challenges in broadcasting the highly anticipated final of Asia’s second-tier continental competition.

Last week’s match — a historic encounter between two countries still technically at war — took place with no live broadcast and no foreign media in attendance, and with FIFA president Gianni Infantino one of just a handful of spectators.

Infantino said he was “disappointed” after attending the match and “surprised” by the absence of fans and lack of media access.

Tottenham Hotspur star Son Heung-min described the game, which ended 0-0, as “very aggressive” and one South Korean official likened it to warfare.

Last week’s debacle raised doubts over the prospects for further North-South sporting co-operation, once a driver of nuclear diplomacy.

The South’s team had expected large crowds and until the last minute had no idea that even North Korean spectators would be absent.

The match came after a series of North Korean missile tests raised tensions in the region, and after the breakdown of talks with the US over Pyongyang’s weapons programmes.

Since the collapse of the Hanoi summit between North Korean leader Kim Jong Un and US President Donald Trump in February, Pyongyang has regularly excoriated Seoul, ruling out prospects of inter-Korean dialogue.

It is a far cry from the cross-border warmth of last year, when South Korean President Moon Jae-in seized on the Pyeongchang Winter Olympics to help broker talks between Pyongyang and Washington.

At the time, Moon and Kim discussed and agreed on further sports exchanges including a joint bid to host the 2032 Olympics.

But last week’s qualifier outraged South Korean fans, who now say they are fed up with sporting exchanges with the North.

Anyone trying to follow the match had to settle for basic live updates provided by FIFA throughout that were limited to yellow cards and substitutes.

Announcing the change of venue for the AFC Cup, the Kuala Lumpur headquartered football body said that its rights partners had advised it of challenges in “the production and broadcast delivery of the final match”.

“The AFC, after careful consideration of the challenges… is compelled to assign the final match to be played in a neutral venue,” it said.

The stadium for the final will confirmed in due course, the body added.